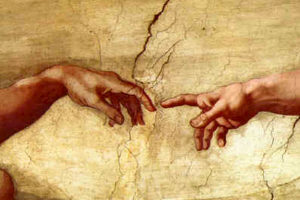 Must there be a Creator just because energy and matter exist?
I don’t believe that.

So, our brains can’t comprehend many things, but that does not give us carte blanche to invent stuff and brand it as Truth. Just because we can’t understand something, we are not obliged to fill that cognitive void with made-up stuff. We CAN do that of course – it’s culture, fantasy and creativity – but it has nothing to do with Facts and Reality. Until it’s scientifically proven will say.

If something takes the form of Life, does THAT make it more plausible for a Creator?
Not for me. DNA is just another form of energy and matter, it’s just chemistry and one amongst many forms of energy redistributions through spacetime. It’s self-replicating molecular structures and processes.

If Life develops a consciousness; does THAT make it more plausible for a Creator?
Not for me. In the question about a Creator, nothing have really happened here, it’s all still the same as it was at the first question in this text.

I can not believe in something just because I can ask a question about that thing. If a chemical construction – a carbon based DNA structure – ask if there is a Creator who made it’s existence possible, it’s just an electro-chemical process in that brain, nothing more or less than any other electro-chemical process in that brain. It can also ask if there are trolls in the woods or if there is a man in the moon. It can ask anything and no question makes it more plausible for a Creator of the Universe. Only scientific proof would change that. For me.

Our intellects and emotions look around and we see Wonders. The mere fact that we are able to experience and value deep emotions when facing these Wonders, does not mean that there must be a Creator. Our capacity for love and complex thoughts does not imply that there must be a force with similar properties that created the Universe. Not more than the ability for electrons to jump between atoms, or gravitation, is a sign of the Devine. For me the existence of Homo Sapiens cortex does not hint any existence of a Creator.

The existence of sentience does not give any proof of a Creator either, not even a hint. I wish there was a Meaning and a Creator, but I can’t believe it and I can’t pretend I believe it. That’s how my brain ticks. I can’t fool myself. (If self-deception really exists, there are some interesting evolutionary theories about this, I’m personally not capable of this psychological phenomenon. Maybe – like many neurological processes – only some brains are capable of self-deception, like only some brains are capable of psychopathy, synesthesia, epilepsy, eidetic memory, etc. Maybe self-deception is not a generic function of the brain in Homo Sapiens. Or you may say that I’m no exception and that my claim that I’m incapable of self-deception IS self-deception, but the best – and maybe only – witness and judge in this case must be me myself. I’m the only one who can know this – or at least come closest to the truth in this specific case – and then it’s just about believing me or not).

A sentience existence does not assume a sentience Creator, consciousness does not imply a conscious source behind the consciousness. For me consciousness is a local electro-chemical process in some animals – mostly mammals – on a specific planet (maybe on other planets too). It’s a result of evolution amongst many other results of evolution (wings, eyes, reflexes, furs, eggs, happiness, fear, muscles, dreams).
If science tells me otherwise (e.g. that consciousness is universally fundamental) some day, I will accept it of course. Gladly. Sounds interesting.
Consciousness IS an enigma, but it does not give me God, Allah, Oden, Shiva or Jupiter. That’s to far fetched for my taste. That’s merely culture for me. Often interesting culture, but 100% man made, like all other mythologies.

Our emotions – our short lives and our mortality – tells us there should/must be something Bigger behind All This, but emotions are not the best judges on this topic. I understand that a good story (e.g. a religion) is a cure for many to meet those emotions, and it’s good if it makes people happier. But it’s not for me and as long as other keep their faith private and not trying to force it on me and society, I have no say in their lives. Delusion is a human right and if it’s harmless to others – including their children – I will fight for their right to be in Fairy Land. Many can’t take the hard cold truth about Universe and our existence and I understand that. Escapism – any form – may be a rescue for many and if it doesn’t harm third person it’s all fine and well.

There is another dimension to (some) religions too: Hybris. A naked ape with a brain that ask a question why it exists, and creates an answer that tells it that it’s something similar to itself (a conscious intelligens) behind it all, is by definition a megalomaniac or a person with severe hybris. That’s my opinion.
I think it’s tasteless and dishonest to create a god and refuse to confess that action, and instead claim that the invented god created THEM. If the religion is one year or thousands of years old makes no difference; every single person who believes (in most) religions personally creates the god himself/herself. I can’t see it any other way.

Nothing in my world signal that there must be an origin-sentience who created todays multitude of sentience. Sentience is for me a biological variation, or a form of energy redistribution through spacetime. We have many forms of energy redistributions; flowers, elements, waves, light, gases, minerals…and we have sentience, just yet another one. It’s not objectively special just because we ourself regard it as special, it’s not a miracle or fantastic or super unique just because we say so and FEEL so (of course we do, we are sentience). It’s just emotions made by brains that can’t comprehend how insignificant they are, how trite life itself is in the Big Picture, and soon Death comes and then there is mere Dust and maybe even your children dies before us and there is mere Dust plus unbearable Pain.
Yes, I hate the scenario myself, this grim truth, and I wish I wasn’t a conscious sentience, but I’m here now and a lie can’t comfort me.

When we look at the Universe and have this emotional rush of wonder and awe of the vast numbers, distances, time, space; it’s a reaction caused by our limitations. Objectively there is nothing more fantastic about the Universe compered to a single stone on the ground, a glass of water or a piece of an autumn leaf.
I also feel humble when I see the complexity of the systems in the Universe and the mind-blowing solutions that biological evolution comes up with. But I know that it’s my lack of understanding, small perspective and narrow time horizon (we live in super slow-motion), that makes me think that all this is so fantastic. It is what it is and there is nothing complex or simple, nothing big or small (like there is no good or evil). Objectively it’s all trivial. Or not even that of course when nothing we can come up with describes what it is. It IS, that’s the only true valuation we can give. It IS.

So, again: Must there be a Creator? Not what I understand and my emotions – which really are irrelevant in this case – tells me nothing either. Not a hint. Nothing. And even IF there is something behind It All, I’m sure it’s nothing like the stories and beliefs in any religion. I think we are incapable to make up a story that even resemble what is behind All This, if there IS Anything behind All This.

Our brains are to the Big Questions not even what worms brains are to all our collected science, our space projects, video compression mathematics and the construction of computers. Maybe our brains can’t even construct the questions that could touch the – for us – Big Stuff. Maybe we don’t have the tools, language, symbols and concepts for that. Even math may be just another human made system that by coincidence seems to fit some patterns in the Universe, but those patterns may be just surfaces of something completely different, maybe reflections that describes some irrelevant deviations of the Real Thing, the illumination may not be representative for Next Level.

Since one hundred years with quantum mechanics, we have some sever problems to go further. It seems like the path forward is only open for philosophy and maybe mathematics. Scientifically proof is not on the table and mathematics alone does not cut it for humans.

But even if we can’t mentally and scientifically leave our little domestic bubble, this little bubble is still hardly researched at all. There is still gigantic discoveries and progress waiting ahead, it’s just not about the Big Questions. And: There is no rule that determine that a question must have an answer, or that the author of a question will find an answer to that question sooner or later.

What we have is love and science. That’s all. Today we have neuroscience, bio-science and quantum-theory at the frontline, but of course this will lead us to other even harder stuff. We are just pealing the onion, but that’s okey, that’s what we do and I enjoy science. The journey itself (and meanwhile reducing suffering, especially amongst children) IS the goal.