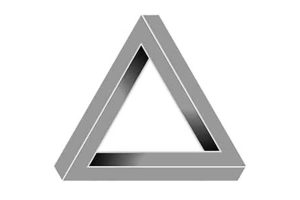 Compatibilism is a paradox for me, because I can’t fit in Free Will in a deterministic Universe. I can’t fit in ”a little” Free Will in the equation, that a specific part in Universe would be separated from the Laws of Nature and have room for Free Will.
Either there IS Free Will all over the place, or there is NO Free Will in ANY place.
For me the Universe is deterministic, that’s the fundamental structure and I’m sure most scientists agree. Quantum mechanical theories does not change that, at least not when it comes to an extremely slow primate brains consciousness (and even if there are billions of parallel universes/possibilities, there is no Free Will in any of them). Whatever happens at the quantum level – with superpositions and entanglements – it is still under the laws of causality and even if it’s not, I can’t see how that would create Free Will for a specific form of carbon based construction (life).
The notion of Free Will is in my view pure hubris, like the bizarre vanity that we are images of a god.

Compatibilism separates the brain and neurons from the big deterministic flow in Universe since the Big Bang. Or at least it’s trying to invent a logic that it all ”slows down” – or takes a ”detour” – so that the Agent (a conscious self) can CHOOSE between given options. Compatibilism states that the process in a human brain – in some magic way – is not under the forces and laws of causality, like the rest of the Universe is. The consciousness – an automated electro-chemical illusion – is in some strange way creating Free Will, a force so strong that it defies all the other combined forces in Universe. A force so enormous that it can bend the way energy/materia takes through time and space. Free Will would then be the gigantic force that breaks the flow of energy redistribution in the Universe. But where does this enormous power comes from? Is it a fundamental force in Nature? Like the electro-magnetic force? Like gravitation? Sounds like ”god” to me.

For me the series of causes and effects is total in both big and small. And everything is connected to the initial Big Bang through series of events. I can imagine a thread from every big or small object – and every energy exchange – back to The Start. And this goes also for neurons in a brain of course. It’s the same for planets as for quarks. Any other suggestion is Super Natural for me; it’s religion (even though this religion may not claim an intelligent creator/creators and/or purpose/reason).

I really want Free Will to be true. I don’t enjoy the fact that it’s scientifically impossible to find Free Will in matter or life. But I can’t pretend anything I don’t believe. That’s how I’m wired, that’s how causality make me think at this exact moment. I’m not capable of self-deception, I have never even understod that concept; self-deception (another paradox for me).
I can lie for other and be false in social clusters like any other person, but I can’t lie to myself. I have – for example – searched a god and an objective ”meaning” to my existence all my life, but I have found nothing. Same goes for Free Will; it’s not there. The only thing I have is science and the day science proof the existence of Free Will, no one will be more pleased that me. That day EVERYTHING we know about Universe would be proven wrong. ”Paradigm shift” is an understatement.

When two rivers meet in a delta, the new common content the stream gets is determined of what the two separated rivers collected on their way down from the mountain and the local earth the new single river flown through. The result is inevitable. If a river can’t freely decide it’s content and it’s way forward in space and time, nor can a brain.

In every single event there is threads back to Big Bang. Every single neuron – every single micro reaction between synapses – have a thread back to Big Bang. Centillions and centillions of constellations results in specific constellations every nano second; that’s your thoughts and the actions you FEEL are conscious actions was actually determined by the Big Bang and everything that happened from there all the way to NOW. The FEELING you have is also determined, EVERYTHING is determined.

Try to imagine that your brain is connected to the Big Bang and executing results of series of energy redistribution centillions of times every nano second. Try to imagine centillions of thin cables connected with Big Bang and every thin cable is a series of causes and effects through time and space. The brain is ”remote controlled” by all those events and can’t do anything that is not a result of all those causes and effects. Everything just unfolds ”infront” of you and you are just a real time spectator. Your consciousness is a dream and in that dream you are convinced that you decide things, plan ahead and create your own thoughts. The illusion is total, but remember that we all live with other illusions all the time (e.g. colours does not exist). The illusion of Free Will – and consciousness – is just one of many illusions. But it’s – for most – impossible to accept that THIS illusion is an illusion. Some kind of emotional obstacle is built in this illusion. If it favours our species survival evolution will – in time – dismantle this obstacle.

Maybe our science and our understanding of the Laws of Nature is just a huge misunderstanding – a gigantic hoax – but that does not give us Free Will either.The ONLY things that gives credibility to Free Will is our FEELING of Free Will and MYTHOLOGY (e.g. religon). Remember: We also feel and see that the world is flat or that the sun revolves around the earth – it’s obvious – and everyone can create a mythology. And…even if you’re sceptic against science, you use it every day and when you get sick I’m sure you love science.
You can cherry-pick science you like and trash other science you don’t like, but not even that will give you Free Will. Not in reality, just in your head.

Maybe one day science will prove Free Will in animals (maybe in plants too), but that day we must have switched out our complete science catalogue for another completely different one. Nothing we know today about our Universe will be relevant the day science prove Free Will. I’m sadly convinced that such day will never come. Just because an ape named Homo Sapiens have this experience of Free Will does not make it exist outside his/her experience.

If you think your dream last night was real – that it happened in reality outside your brain – you may have another opinion on this matter. I stick with science. It’s not making me happy, but it’s the way my life unfolds, the way I’m wired, the way causality makes my brain think. Don’t get me wrong; I have my kicks from science (for me it’s a kind of escapism) but of course I would be happier if I where just totally ignorant and lived in the moment (Carpe Diem). Anyway, happiness is electro-chemical balance parameters in the brain (and body) and I’m sure one can be enlightened and happy at the same time. But that’s another blog post…