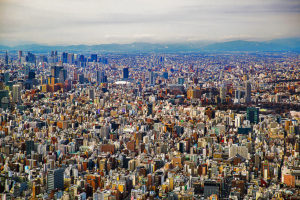 Urbanisation can be slow and organic – like it was the first millenniums of civilisation – or it can be fast and chaotic like in many development countries (or e.g. New York 100-150 years ago). Even in the rich part of the world the urbanisation is today very fast – and though it’s planned and regulated – it can be ugly and cold.

Probably the only way to deal with the environmental issues that explosive population growth brings, is to pack people together in huge clusters. Urbanisation may be the only way to have billions and billions of Homo Sapiens on this planet. Especially if we all are going to consume energy and matter at current level…or even more of it.

To have land enough to produce food – and still have protected ”wild nature” areas with wild-life – we must pack us tight in urban areas. Urbanisation is also the key to an efficient energy and transportation solutions, which is impossible if we spread out. In some areas sweet water shortage is only possible to solve if a wast majority stay in compact areas.

It’s all pure mathematics, and a smart planning for a system of dense clusters – huge metropoles – is maybe the only way to make it possible for a near future of 10 billion people to have a descent life. It’s pure luck that most Homo Sapiens seems to thrive in cities. It seems like most people can be happy even in very dense artificial environment, if the basic needs are satisfied. I believe that many people even prefer to live tight together, not only for protection and wealth opportunities, but for all kinds of reasons.

To plan and develop intelligent urban solutions is one of the main keys to generally happy human life tomorrow. Efficient and renewable energy solutions and advanced and comprehensive public transportation systems is of course the key factors to success, but what many forget is the sound pollution problem.
Most of the destructive noise will disappear when private cars – electric or not – is banned from urban centers, as a bonus we also get rid of hazardous particles from millions of tires scraping asphalt. And of course, we can’t use 10-40% of the city area for private cars, those huge machines mostly standing still and when rolling often have only one person it them. And to use energy to transport one person at 70 kilos – in a metal construction of nearly one ton – is just plain stupid. It’s embarrassing imbecile behaviour. Stoneage. And it’s decadent. It’s a bonfire to light a cigarette.

So, I can’t see a future without banning private cars in urban dense areas. It’s not only about space, it’s a question of life quality in general. I would like to see a city where kids (and adults) can move around freely without constantly risking to get smashed by cars, a city without this constant stressful adaptation in behaviour around traffic, even if it’s mostly subliminal. I’m sure it takes significantly brain bandwidth and sensory load – a constant low/medium level of stress – and for many it’s mentally damaging in the long run. And stress always – sooner or later – manifests in physical disorder.

I would like a city where you can walk around and have a normal conversation without screaming to be heard over the noise, a noise made mostly by cars. A city designed for PEOPLE, not designed for CARS. A more peaceful environment for more spontaneously behaviour and movement, with Homo Sapiens not trapped inside a fixed narrow grid made for cars in motion or parked like walls along the streets. It’s far from our natural habitat where we developed hundreds of thousands of years. This symmetry – with narrow ”channels” where we are allowed to be and move (sidewalks) – is not a descent way of living. We are like lab rats in a maze. If pedestrians could take over more of the space between houses from cars, it would be a shockingly big change in city life. A huge positive change. (The space itself is necessary; it’s about fire isolation and fire fighting, garbage transportation, emergency lanes, service for disabled, public transportation, etc).

If we’d always had private car free cities – and someone today presented a plan to redesign the city to what we have now and introduced private cars – everyone would find the idea absurd and horrifying. No one would accept what today is considered normal. It’s an example of extreme dulling that so many don’t demand immediate change. If you wake up from this numbness adaptation – and suddenly see and feel the terrible situation with private traffic in a city – it’s a sad experience and there is no turning back; you are enlightened. You can’t accept it. You can’t silently adapt anymore. You want to ban private cars NOW. And you definitely don’t want this bad environment for your children. If the future can’t be better than this, the urban civilisation project is obviously stalled.

Total urbanisation is a fact whether one like it or not and it may be the only way to survive as a species. We have to rethink the concept and design civilised cities. Intelligent cities. The easy part is to ban private cars – it’s a ban that doesn´t harm anything or anyone – and then we can take care of the hard parts where difficult compromises have to be made.

In the future people will laugh – or cry – about the crazy traffic situation we had in a period of one hunded years in the cities. It will be a strange and stupid parenthesis in civilisation for coming generations, when they read history and see footage and documents from our time. Like we today laugh at – or get upset by – the times when we smoke cigarettes in restaurants/cinemas/airplanes/buses/waiting rooms, or when teachers beat children in school, every house had their own coal heating, pregnant women drank alcohol, kids on bikes without helmets, used DDT in our gardens, used children in factories, executed people (if you live in a civilised country that banned this a long time ago), etc.

For me the situation with private motorism in cities is absurd. It’s like a bad dream. A terrible misstake made one hundred years ago. Wake up and see it. You will be shocked.

To ban it is rational and progressive, to keep it is retrogressive. Just think hard for a minute, use your pure reason and you will see it. The situation is insane.