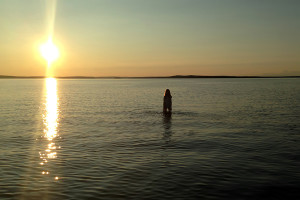 Humanism is the atheistic result of the enlightenment hundreds of years ago. It was a philosophy invented to keep moral systems even if you didn’t believe in gods and religion dogma, and today a big part of mankind populating on this planet call themselves humanists. But humanism also embrace the illusion of Free Will, so in my opinion humanism is also a religion. So – humanists are per definition religious people, because they believe in a super natural force called Free Will.
Ask any atheist you know if they believe in Free Will. If they do they are religious but the religion they belong to have no mythology and worshipping traditions – no collective cultural system – no common organisation. It’s a religion without any specific creator or story about why we are here, but with the belief in a super natural force; the Free Will.

I don’t know anything about what was before Big Bang or why it ignited. We can not know this – it’s far beyond our capabilities to even guess in this matter and no science have ever explained where energy originally comes from or why Big Bang ignited or anything about pre Big Bang… and that Nothing also must be Something. We can’t comprehend nothingness or eternity. It’s just words, there’s no understanding of those words. No images. No references.
For me science and religion is two different planets and science is for everyone when religion is – and should always be – a private matter.

Science and reason have many times through history trashed the primitive and childish (but often beautiful) mythology in religions, but we should not confuse organized and written religion with the question of a devine creator or creators. The big issues have never been touched by science and that’s exactly as it should be; science have no tools to even search for answers when it comes to The Big Question; is there a “consciousness” and “intelligens” behind the creation?
A true scientist say: I don’t have a clue – it’s far far away from my field or any scientific activity.

Some scientists are at war with religious prejudices and stupidity, and harmful dogma that organized religions want to force on the population in general – and that war is all good and important. But it has nothing to do with god or gods, it’s just people against people…like always. Of course.

To be an atheist – to deny any intelligence and consciousness behind the creation – is not science. Denial that a religious mythology – for example the bible – is the truth about what happened a long time ago, can be done with science. You can regard every religious mythology as fairytales without being an atheist. You can also laugh att all those stupid moral laws springing from religions…and still be deeply religious. To be religious is an emotion, nothing more, nothing less. Emotion.